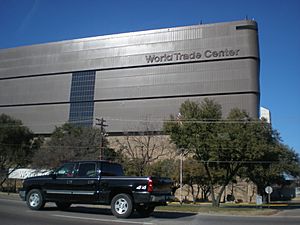 The two-story International Trade Plaza is the original building at Dallas Market Center. 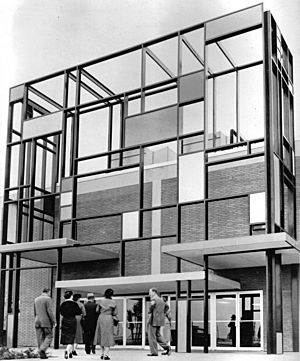 Dallas Market Center was founded in 1957 by real estate developer Trammell Crow. The first building was the Dallas Homefurnishings Mart, designed by Donald H. Speck. The 434,000-square-foot (40,300 m²) building was reborn in 1999 as the International Floral & Gift Center and is now known as The International Trade Plaza.

The first trade event at Dallas Market Center was held in July 1957 and was attended by 1,850 visitors. Today, the largest markets attract more than 50,000 attendees from all 50 states and 84 countries. 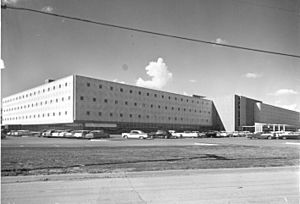 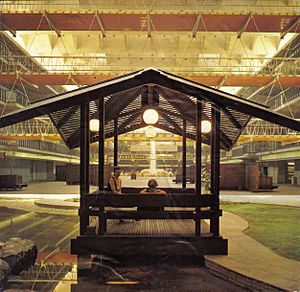 The Trade Mart was the destination of President John F. Kennedy's motorcade on November 22, 1963 when he was assassinated in Dealey Plaza. He was scheduled to give a speech to 2,600 people at a sold-out luncheon in the Grand Courtyard.

In 1964, English sculptor Elisabeth Frink created the bronze sculpture "The Eagle" which sits outside the main entrance today. It features a William Blake quote and a plaque which reads, "Placed in memorial by the friends of President John Fitzgerald Kennedy who awaited his arrival at the Dallas Trade Mart Nov. 22, 1963."

In 1964, the Apparel Mart opened for business at a cost of $15 million. For four decades, the building served as a trading center for women's, men's and children's apparel and accessories. It closed in 2004. Today, apparel and accessories showrooms reside on the top floors of World Trade Center, and apparel trade events held at Dallas Market Center attract buyers from around the globe.

The World Trade Center, the centerpiece of the campus, opened in 1974 with seven stories but was expanded to feature 15 floors.

The Toy Industry Association holds its Fall Toy Preview at Dallas Market Center each fall. This show for mass market retailers is the toy industry's most important preview of products under development for the following year.

All content from Kiddle encyclopedia articles (including the article images and facts) can be freely used under Attribution-ShareAlike license, unless stated otherwise. Cite this article:
Dallas Market Center Facts for Kids. Kiddle Encyclopedia.