Dalyellup, (pronounced Dal-yellup), is an outer southern suburb of Bunbury, a city in Western Australia, located within the Shire of Capel local government area. The suburb was established in 1999 when the Department of Housing and Works entered into a joint venture with Satterley Property Group to develop Dalyellup Beach Estate, a master-planned community which is expected to yield 3,000 lots by its completion in 2012. The area is embroiled in a controversy over toxic waste dumping.

In the original advertising campaign, Dalyellup was heavily promoted as "A village in the Forest by the Sea". Along this theme the local private Lutheran school is called "Ocean Forest".

Dalyellup residents had a median age of 29—well below the median of 37 in the Bunbury statistical district—and the median individual income was above-average for the region—$683 per week compared with $492 per week. The population of Dalyellup was predominantly Australian-born—74.9% as at the 2006 census—while significant English (7.2%) and South African (3.6%) minorities were identified. In the 2006 census, 1.73% of residents identified as Indigenous Australians.

The most popular religious affiliations in descending order in the 2006 census were no religion, Anglican, Roman Catholic and Uniting. 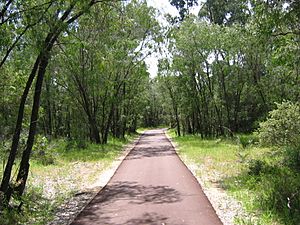 Two large areas within the suburb have been set aside as open space - about 100 hectares (247 acres) of pristine tuart forest, officially named the Usher-Dalyellup Regional Park in 2003, with an interpretative walkway leading to Ocean Drive in neighbouring Usher which was opened on 8 October 2007 by the Minister for the South West, and about 120 hectares (297 acres) of dunes and foreshore to the south. A small shopping centre provides for daily needs, but most residents use Bunbury's shopping facilities.

The placement of a larger shopping centre is currently being considered, due to the rapidly increasing population.

Dalyellup also has a large 106 room aged care and community housing project, managed by a local aged care provider. The facility, known as Bethanie Dalyellup, takes over-55's from the Department of Housing. It was officially opened on 10 October 2011 by Western Australian Senator Louise Pratt.

Dalyellup is served by the 401 route from Bunbury's central bus station, terminating at the end of Norton Promenade on the coast with a journey time of approximately 35 minutes. The route is operated by Bunbury City Transit for the Public Transport Authority.

All content from Kiddle encyclopedia articles (including the article images and facts) can be freely used under Attribution-ShareAlike license, unless stated otherwise. Cite this article:
Dalyellup, Western Australia Facts for Kids. Kiddle Encyclopedia.