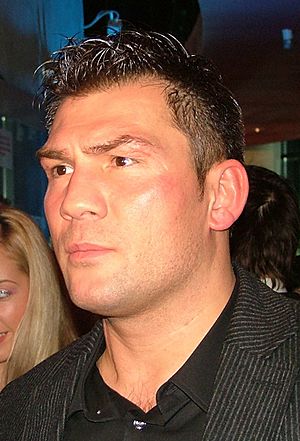 Dariusz Michalczewski (May 5, 1968) better known as Tiger is a Polish boxer. He was World Boxing Organization, World Boxing Association, International Boxing Federation and Lineal champion in light heavyweight for nine years. He was undefeated for twelve years.

Michalczewski started his career in 1991. He won the World Boxing Association title against Leeonzer Barber, who was undefeated for 3 years. After that he combined the World Boxing Organization title and the Lineal title. He also won the Wold Boxing Organization title against Nestor Hipolito Giovannini in Cruiserweight. In 1996 he fought against Graciano Rochigani, who was one of the best Light Heavyweight boxer at this time. Michalchewski won at round 7. He combined the World Boxing Organization, World Boxing Association, International Boxing Federation and Lineal after a win against Virgil Hill, who was one of the world's best boxers at that time. In 2000 he fought the second time against Graciano Rocchigani. He won the fight in the tenth round by knockout. After the fight against Derrick Harmon, he needed one win to stop the record of Rocky Marciano, who was undefeated for 49 fights in a row. In his fortyninth fight, he fought in the Color Line Arena, Hamburg against Julio Cesar Gonzalez. Michalchewski wasn't trained and lost by split decision. In 2005 he made a comeback against the World Boxing Association Champion Fabrice Tiozzo. He lost the fight by knockout in round five. After that, he said that he never will fight again. In his best time, he counted with Roy Jones Junior as the best light heavyweight fighter of all time.

All content from Kiddle encyclopedia articles (including the article images and facts) can be freely used under Attribution-ShareAlike license, unless stated otherwise. Cite this article:
Dariusz Michalczewski Facts for Kids. Kiddle Encyclopedia.