The Darlinghurst Gaol is a former Australian prison located in Darlinghurst, New South Wales. The site is bordered by Victoria, Burton and Forbes streets, with entrances on Forbes and Burton Streets. The heritage-listed building, predominately designed by New South Wales Colonial Architect Mortimer Lewis, was closed in 1914 and has subsequently been repurposed to house the National Art School. 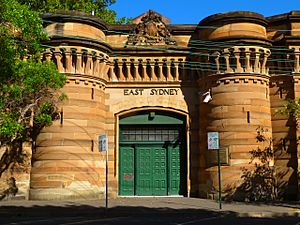 The imposing entrance to the gaol 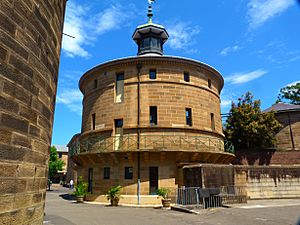 Grounds of the former gaol in 2011

The gaol was finally completed in 1885. The main material used for construction of the gaol is Sydney sandstone, cut into large blocks by convicts. Convict markings on the blocks are visible along the upper half of the wall on Darlinghurst Road. A tall circular chapel stands in the middle of the site, around which are sited the six rectangular cellblocks in a radial fashion.

Australian poet Henry Lawson spent time incarcerated here during some of the turbulent years of his life and described the gaol as Starvinghurst Gaol due to meagre rations given to the inmates. The site is now open to the public as The National Art School. The last hanging at the gaol was in 1907.

Hangings were open to public viewing throughout several decades. People would gather at the front gate of the gaol in Forbes Street, and the condemned would be brought out on a platform built above the gaol gate. The public executioner Alexander Green lived for a time in a hut outside the eastern wall of the gaol, would then leave his house to the jeers and catcalls of the gathering crowd, enter the prison and do his job. Seventy-six people were hanged at Darlinghurst Gaol, but most of them met their demise on the scaffold inside the gaol in a corner of E-wing. Among those who met their demise at the end of a rope were bushranger Andrew George Scott, better known as Captain Moonlite, in 1880, and the last woman to be hanged in NSW, Louisa Collins, in 1889.

The site was transferred in 1921 to the New South Wales Department of Education, who adapted the building for use as the East Sydney Technical College. The National Art School was established in 1922 and is now the sole occupant of the site.

All content from Kiddle encyclopedia articles (including the article images and facts) can be freely used under Attribution-ShareAlike license, unless stated otherwise. Cite this article:
Darlinghurst Gaol Facts for Kids. Kiddle Encyclopedia.