Darlinghurst is an inner-city, eastern suburb of Sydney, New South Wales, Australia. Darlinghurst is located immediately east of the Sydney central business district (CBD) and Hyde Park, within the local government area of the City of Sydney.

Darlinghurst is a densely populated suburb with the majority of residents living in apartments or terraced houses. Once a slum, Darlinghurst has undergone urban renewal since the 1980s to become a cosmopolitan area composed of many unique precincts. Places such as Victoria Street (which connects Darlinghurst to Potts Point in the north), Stanley Street (Little Italy) and Crown Street (Vintage and Retro Fashion) are known as culturally rich destinations. These high street areas are connected by a network of lane-ways and street corners replete with small bars, cafes and boutique indie retail.

Demographically, Darlinghurst is home to the highest percentage of generation X and Y (28–47 years of age) in Australia. The vast majority of businesses in Darlinghurst are independently owned and operated small businesses with over 50% of all commercial activity in the area being consumer oriented: indie retail, food, drink, dining, leisure and personal services. Darlinghurst is also home to large number of off-street creative industries. This business mix coupled with the area's history of inclusion and acceptance give Darlinghurst an eclectic and vibrant flair.

Darlinghurst's main street is Oxford Street. This major Sydney road runs east from the south-eastern corner of Hyde Park through Darlinghurst and Paddington and terminates at Bondi Junction. Oxford Street is one of Sydney's most famous shopping and dining strips. The Darlinghurst end is well-known around the world as the centre of Sydney's gay community, is the yearly parade route of the Sydney Mardi Gras and the spiritual birthplace of the LGBT rights movement. It is home to a number of prominent gay venues and businesses, while more broadly Darlinghurst is a centre of Sydney's burgeoning small bar scene.

There are a number of named localities in and around Darlinghurst including Taylor Square, Three Saints Square, Kings Cross and confusingly also East Sydney. Locals have used this name to refer to the area immediately around Stanley Street in the suburb's west, however the title is used more broadly throughout the area from Wooloomooloo up to Taylor Square where the old Darlinghurst Gaol still has the words East Sydney in brass lettering above the main entrance. This is because from 1900 to 1969 the entire area to the east of Sydney's CBD, from the harbour to Redfern, was an electorate known as the Division of East Sydney.

Already in 1820 the entire ridge line running from Potts Point to Surry Hills was known as Eastern Hill.

Darlinghurst shares a postcode (2010) and an extensive soft southern border with neighbouring suburb Surry Hills which, with Paddington to the east and Woolloomooloo, Rushcutters Bay and Potts Point to the north, comprise the metropolitan region of East Sydney. Although only minutes walk away from the Sydney CBD, this region is geographically distinct from it; separated from the more well known commercial centre by several landmarks: Central railway station, Hyde Park, St Mary's Cathedral and the The Domain.

Sydney's Eastern Suburbs cover all the land from the east of Darlinghurst up to the Pacific Ocean.

The suburb was originally known as Eastern Hill and then Henrietta Town, after Governor Lachlan Macquarie's wife, whose second name was Henrietta. The loyalties changed with the change of governors and the suburb became Darlinghurst in honour of Elizabeth Darling, the popular wife of Governor Ralph Darling, during the early 19th century. The suffix 'hurst' is derived from the Old English word hyrst, meaning wooded area. 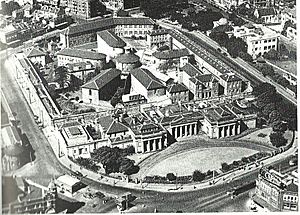 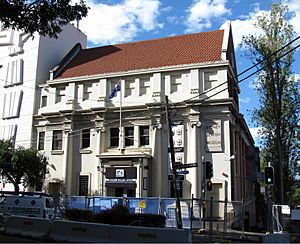 Darlinghurst has two of Sydney's museums: the Australian Museum (a natural history museum) and the Sydney Jewish Museum. The suburb also features St Vincent's Hospital, and is associated with the Sacred Heart Hospice on Darlinghurst Road, and the Garvan Institute of Medical Research.

Darlinghurst Gaol, the large sandstone penal complex in the middle of Darlinghurst was built between 1836 and 1840. The large sandstone walls still bear convict markings, and the complex features six wings surrounding a circular chapel. Australian poet Henry Lawson spent time incarcerated here during some of the turbulent years of his life. The last hanging at the gaol was in 1907 (Jahn, 1997). The site became East Sydney Technical College in 1921, but was turned into the National Art School from 1995.

Completed in 1912, this three-storey brick and stone building occupies a prominent location at the corner of Darlinghurst Road and Victoria Street. It was designed in 1910 by Walter Liberty Vernon (Jahn, 1997). It still functions as a fire station and is listed on the Register of the National Estate. 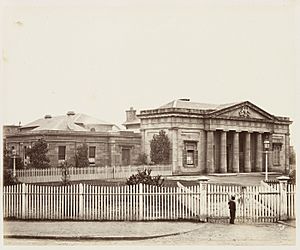 Darlinghurst Courthouse is an imposing sandstone building on Taylor Square. It was designed by architect Mortimer Lewis (1796–1879) in 1844, and has a Greek Revival style facade. The central block is adapted from an 1823 design in Peter Nicholson's 'The New Practical Builder' (Apperly, Irving & Reynolds, 1989).

Oxford Street is the major commercial thoroughfare of Darlinghurst, running from the south-east corner of Hyde Park, through Taylor Square and beyond into Paddington, Woollahra and Bondi Junction, respectively. Oxford Street was originally called The South Head Road and work commenced on the road in 1811 (Faro, 2000). It was a toll road in its early years with the toll gates being located near present-day Glenmore Road. Oxford Street assumed its current name in 1875. Oxford Square is located at the intersection of Oxford and Burton Streets. Oxford Square is also the name of a small shopping centre located opposite, on the corner of Oxford and Riley Streets.

Stanley Street is one of the suburb's two secondary restaurant strips (with Victoria Street) and is often referred to as Sydney's first "Little Italy". However, the restaurants range from Japanese, Thai and Italian and the prices range from basic to moderate. There is an annual Italian Festival held here every June.

Victoria Street is the other major cafe strip. Restaurants range from basic to upmarket. The majority of the cafes have outdoor seating. Several iconic restaurants are in this area, such as Tropicana and Bar Coluzzi. 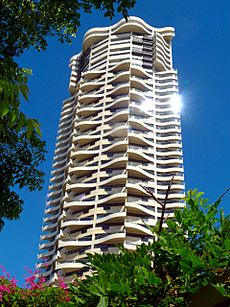 The Horizon, located in Forbes Street, Darlinghurst, is a 43-storey residential high-rise building completed in 1998. It has a distinctive scalloped facade and is finished in rendered concrete. The building was designed by Sydney architect Harry Seidler and is controversial in that it was one of the first high-rise buildings constructed in the predominately low rise area, with critics saying it caused overshadowing of the surrounding area.

According to the 2011 census, there were 10,060 residents in Darlinghurst. 58.8% of people were male and 41.2% female. This was a higher rate of male residents than the national average of 49.4%. In Darlinghurst, 47.2% of people were born in Australia. The most common other countries of birth were England 6.9%, New Zealand 4.9% and Thailand 1.8%. Being an inner-city suburb, Darlinghurst had a high rate of people walking to work (36.9%). The dwelling types in Darlinghurst were mostly units and apartments or semi-detached houses. Just 2.6% of dwellings were separate houses, compared to the national average of 75.6%.

There are no train stations in Darlinghurst, however Kings Cross railway station on the Sydney Trains Eastern Suburbs and Illawarra line is just over the northern border of the suburb. Museum station on the City Circle, is located just to the west of Darlinghurst, on the south-west corner of Hyde Park.

The following buildings are listed on the Register of the National Estate or the State Heritage Register. 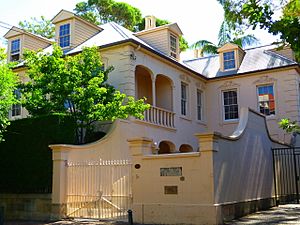 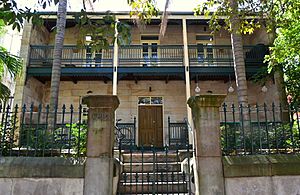 The Darlinghurst area is famous for the annual Sydney Gay and Lesbian Mardi Gras. The parade, first held in 1978 as a protest march by members of the gay and lesbian community, marks the end of a three-week festival and takes place on Oxford Street, the main street that runs through several suburbs, including Darlinghurst. The Sydney Jewish Museum is on the corner of Darlinghurst Rd and Burton St (148 Darlinghurst Rd) and features exhibitions about the Jewish community in Sydney. There are many small private art galleries in Darlinghurst, including Black Eye Gallery (Darlinghurst Rd; photography), King St Gallery on William (William St; painting), Conny Dietzschold Gallery (Crown St; contemporary art), Robin Gibon (Liverpool St; painting, sculpture), Watters Gallery (Riley St; painting, sculpture), Gallery 9 (Darley St; contemporary art) and Liverpool St Gallery (Liverpool St; contemporary art). Entry to these galleries is free, and most of the exhibitions will display the work of Australian artists. There is also a gallery in the National Art School (NAS) that hosts exhibitions in a mid-19th century sandstone building.

The Eternity Playhouse, Burton St, Darlinghurst, opened in 2013, following the renovation of the former Burton St Tabernacle, which was founded in 1887. Following its purchase by the City of Sydney in 2004, plans were gradually developed to renovate the building as a theatre. The 200-seat theatre is the home of the Darlinghurst Theatre Company, and the renovation was designed by architecture firm Tonkin Zulaikha Greer.

All content from Kiddle encyclopedia articles (including the article images and facts) can be freely used under Attribution-ShareAlike license, unless stated otherwise. Cite this article:
Darlinghurst, New South Wales Facts for Kids. Kiddle Encyclopedia.