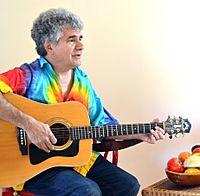 Darryl Cherney (born 1950s) is an American musician and environmental activist. He is a member of the Earth First! environmental movement. He was born in New York City, New York, but raised in Eureka, California. Cherney ran for congress in the 1988 Democratic primary, but lost.

On May 24, 1990, Cherney and his friend, fellow activist Judi Bari, were injured when a pipe bomb exploded in his car. Both were severely injured by the explosion. The case was investigated by the Federal Bureau of Investigation (FBI), which accused Cherney of bombing themselves. He later sued the FBI and was later awarded $4.4 million dollars. Bari died from her injuries. In 2012, Cherney's documentary movie Who Bombed Judi Bari? was released.

Cherney announced in 2015 that he was running for President of the United States for the Green Party nomination in the 2016 United States presidential election. He is running against Jill Stein for the nomination.

All content from Kiddle encyclopedia articles (including the article images and facts) can be freely used under Attribution-ShareAlike license, unless stated otherwise. Cite this article:
Darryl Cherney Facts for Kids. Kiddle Encyclopedia.