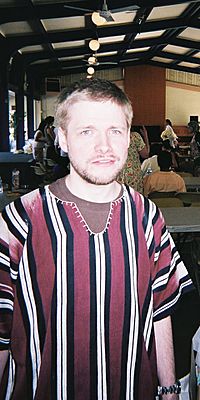 A Dashiki is a loose fitting, brightly coloured garment associated with African culture. It is also associated with the counterculture of the 1960s in the United States. The most popular styles cover the top half of the body. It originated in West Africa. A common form is a loose-fitting pullover garment, with an ornate V-shaped collar. It often has an embroidered neck and sleeve lines. There are both casual and formal versions.

The dashiki originated in West Africa and East Africa. Twelfth and thirteenth centuries burial mounds in Mali (West Africa) have revealed versions of dashikis. Dashikis were worn by both men and women. They may have been influenced by the thawb worn by Arabs who came to the region. Both garments keep the wearer cool in the hot African climate. The dashiki was worn as a work shirt in the shorter version. Another much longer version was called the grand boubou. It is also similar to the kaftan. All three are common to West Africa.

The dashiki became popular in the hippie culture of the 1960s. Peace Corps members returning from Africa brought back dashikis. African diplomats to the United Nations in New York were often seen and photographed wearing colorful dashikis. Dashikis were seen as a symbol of support for black racial struggles. Groups like the Black Panthers wore the Dashiki as a symbol of their black heritage. The Afro hairstyle, faded blue jeans and the Dashiki were all popular expressions of the Black is beautiful cultural movement.

Many of the rock groups of the 60s and 70s wore Dashikis. But black performers of the 60s 70s preferred the more conventional suit and tie look. But in the 80s several black groups wore the dashiki to show their heritage. One South African vocal group, 'Ladysmith Black Mambazo', wore dashikis extensively. This identified them more as Africans than Zulus.

All content from Kiddle encyclopedia articles (including the article images and facts) can be freely used under Attribution-ShareAlike license, unless stated otherwise. Cite this article:
Dashiki Facts for Kids. Kiddle Encyclopedia.