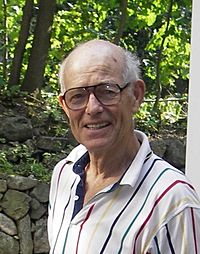 David Gordon Wilson (11 February 1928 – 2 May 2019) was a British engineer. He served as a professor of engineering at the Massachusetts Institute of Technology (MIT) in the United States. He is known for, along with Chester Kyle, starting the modern recumbent bicycle movement in the US. Wilson also invented carbon tax in 1973. He co-founded Wilson TurboPower, a company focused on the development of microturbines, in 2001. He was born in Warwickshire.

All content from Kiddle encyclopedia articles (including the article images and facts) can be freely used under Attribution-ShareAlike license, unless stated otherwise. Cite this article:
David Gordon Wilson Facts for Kids. Kiddle Encyclopedia.