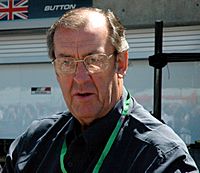 In 1969 Hobbs was included in the FIA list of graded drivers. This is an elite group of 27 drivers who were rated the best in the world by their achievements.

All content from Kiddle encyclopedia articles (including the article images and facts) can be freely used under Attribution-ShareAlike license, unless stated otherwise. Cite this article:
David Hobbs Facts for Kids. Kiddle Encyclopedia.