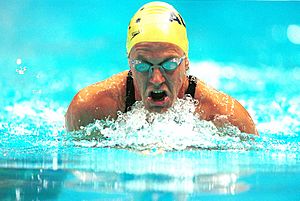 Rolfe was born in Inverell, New South Wales. He was married with one child and lived on the Gold Coast in Queensland.

Rolfe died from complications relating to heart surgery on 7 January 2015 on the Gold Coast. He was 50.

All content from Kiddle encyclopedia articles (including the article images and facts) can be freely used under Attribution-ShareAlike license, unless stated otherwise. Cite this article:
David Rolfe (swimmer) Facts for Kids. Kiddle Encyclopedia.