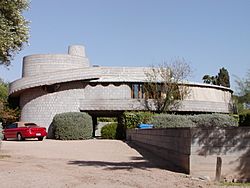 The David and Gladys Wright House is a Frank Lloyd Wright residence built in 1952 in the Arcadia neighborhood of Phoenix, Arizona. It has historically been listed with an address of 5212 East Exeter Boulevard, but currently has an entrance on the 4500 block of North Rubicon Avenue. Parking and access is through the Camelback Church of Christ at 5225 E. Camelback Road.

This 2,500-square-foot concrete-block house was designed and built for the architect's son David and his wife, Gladys, and is situated among orange groves on a site facing north toward Camelback Mountain. The house has a spiral design to cool the house by capturing the wind. It features a long curved entry ramp that anticipates the design of the Solomon R. Guggenheim Museum in New York. David and Gladys Wright lived in the house until their deaths. David died in 1997 at the age of 102; Gladys died in 2008 at age 104.

Gladys Wright left the house to granddaughters who sold it. The new buyer in turn sold it to a real estate developer, 8081 Meridian, who planned to demolish the house and develop its 2.2 acre lot. Efforts to protect the building through a heritage designation were begun in August 2012. The house was purchased by a Delaware LLC, and the owner intends to transfer the property to a non-profit foundation, the David and Gladys Wright House Foundation. On June 8, 2017, the 150th anniversary of Frank's birth, the home's owner, Zach Rawling, decided to donate the home to the School of Architecture at Taliesin, formerly known as the Frank Lloyd Wright School of Architecture. He had hoped the house would be used as a living laboratory for architecture students. In June 2018 the deal was called off and the house was placed on the market in September for $12.9 million.

It was announced on August 17, 2020 that the Wright house was sold for US$7.25 million to Benson Botsford LLC:

All content from Kiddle encyclopedia articles (including the article images and facts) can be freely used under Attribution-ShareAlike license, unless stated otherwise. Cite this article:
David and Gladys Wright House Facts for Kids. Kiddle Encyclopedia.