Deal Pier is the last remaining fully intact leisure pier in Kent. It is the third pier to exist in Deal and was opened in November 1957. Its structure was extensively refurbished and repaired in 1997, with work including the replacement of much of the concrete cladding on the pier's main piles. Work began in April 2008 to construct a new pier-head with a modern restaurant, with the restaurant opened in December 2008.

The seafront at Deal has been adorned with three separate piers in the town's history. The first, built in 1838, was designed by Sir John Rennie. After its wooden structure was destroyed in an 1857 gale, it was replaced by an iron pier in 1864. A popular pleasure pier, it survived until the Second World War, when it was struck and severely damaged by a mined Dutch ship, the Nora, in January 1940. This was not the first time the pier had been hit by shipping, with previous impacts in 1873 and 1884 necessitating extensive repairs. 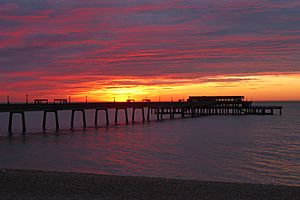 The pier from the south 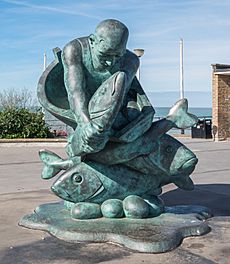 The present pier, designed by Sir W. Halcrow & Partners, was opened on 19 November 1957 by the Duke of Edinburgh. Constructed predominantly from concrete-clad steel, it is 1,026 ft (313 m) in length (a notice announces that it is the same length as the RMS Titanic, but that ship was just 882 feet (269 m)), and ends in a three-tiered pier-head, featuring a cafe, bar, lounge, and fishing decks. The lowest of the three tiers is underwater at all but the lowest part of the tidal range, and has become disused. The pier is a popular sport fishing venue.

In 2018, the pier underwent restoration at a cost of £500,000, in addition to installing more than 300 metres (980 ft) of gas mains supply, as the pier's own gas supply had developed problems. Refurbishment works included resurfacing, replacement and repainting of railings and an upgrade to the drainage system. The works coincided with the 60 year anniversary of the pier's official opening.

All content from Kiddle encyclopedia articles (including the article images and facts) can be freely used under Attribution-ShareAlike license, unless stated otherwise. Cite this article:
Deal Pier Facts for Kids. Kiddle Encyclopedia.