Death and funeral of Hugo Chávez facts for kids 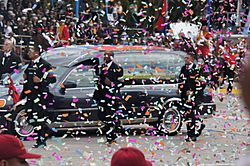 Hugo Chávez, the President of Venezuela, died on 5 March 2013. He was aged 58. Because of his death, the Venezuelan constitution required an election for a new president to be held within 30 days. Vice President Nicolás Maduro became temporary president. On 14 April, he was officially elected.

Chávez' funeral was held on 8 March. Maduro originally said that Chávez' body would be embalmed and permanently displayed in a glass coffin at a military museum. However, on 13 March Maduro announced that this would not happen. This was because the government could not get prepared in the short time that had passed. Maduro extended the National Mourning for four days more, to eleven days. By the end of this, Chávez' body was moved to the Museum of the Revolution at Fort Montana. This had been where Chávez had tried to overthrow the government in 1992.

Chávez's body was never embalmed. He was buried at a cemetery in Venezuela.

All content from Kiddle encyclopedia articles (including the article images and facts) can be freely used under Attribution-ShareAlike license, unless stated otherwise. Cite this article:
Death and funeral of Hugo Chávez Facts for Kids. Kiddle Encyclopedia.