Embalming is the act of preserving a dead body, so it will not decompose. If a human body is not embalmed, it will start to decay very quickly. Because of this, most bodies are embalmed if they will be on display (for example, lying in state) for a funeral.

Embalming is similar to mummification, which many ancient peoples did to dead bodies. Embalming is different from taxidermy, where only the skin is preserved. 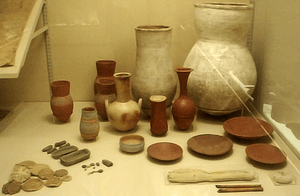 Pottery, dishes and other items from the embalming cache of ancient Egyptian pharoah Tutankhamen.

The oldest mummified corpses that have ever been found were mummified around 5000-6000 BCE. These corpses are called the Chinchorro mummies. These dead bodies were mummified by ancient people who lived in the Atacama desert, in what is now Chile and Peru.

The ancient Egyptians often mummified dead bodies. They started mummifying corpses as early as 3200 BCE. They believed that once a dead body was mummified, the body's soul could find its way back to the body and begin its journey to the afterlife.

Ancient cultures from Ethiopia, Peru, Tibet, and southern Nigeria also used embalming techniques. So did the Guanches, the Jivaro Indians, the Aztecs, the Toltecs, and the Mayans.

Archaeologists have found preserved bodies in China from the time of the Han dynasty (206 BCE – 220 ACE). Nobody knows how these bodies were preserved.

The Middle Ages and Renaissance

By about 500 ACE, knowledge about preserving bodies had spread from ancient cultures, and embalming became much more common in Europe. This happened partly because science and medicine were developing, and scientists needed to dissect dead bodies to learn more about the human body. If bodies were not preserved, they would decay right away, and scientists could not dissect them or keep them for other scientists to learn from.

The 17th and 18th centuries

The English physician William Harvey created the modern method of embalming in the 17th century. This method involves injecting chemicals into a dead body's arteries to keep the body from decaying.

Up until the middle of the 18th century, embalming was used mostly in science and medicine. However, in the mid-18th century, the Scottish surgeon William Hunter used Harvey's methods to preserve bodies in morgues. His brother, John Hunter, was the first to advertise embalming to regular people who wanted to see their loved ones' bodies preserved after death.

In the 19th century, many people became more interested in embalming dead friends and relatives. For example, sometimes a person might want to be buried at a far-away place. However, first, the people who cared about them would want to see their body and pay their last respects to that person. They could do this if the body was embalmed, because the body would not decay. 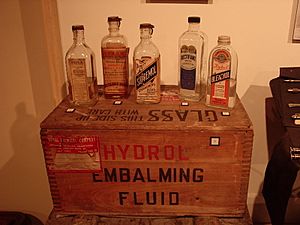 In the United States, embalming became very common during the time of the Civil War. This happened because many people died far from home while fighting in the war. Their bodies needed to be returned home to be buried, and embalming kept their bodies from decaying during these long trips. When President Abraham Lincoln was killed, embalming allowed his body to be sent home to be buried. This made people in the United States more aware about embalming.

In the past, if a person died from an infectious disease, their body would be buried very quickly to prevent the disease from spreading. Embalming became more common as a way to keep diseases from spreading.

By the mid-19th century, people began to run businesses that provided funerals and burials. At that time, the people who ran these businesses were called undertakers. (Now they are called funeral directors.) These people began to use embalming methods regularly, instead of using older methods like packing bodies in ice.

Until the early 20th century, arsenic was often used to embalm bodies. Eventually it was replaced by other chemicals that work better and are less poisonous. In 1867, the German chemist August Wilhelm von Hofmann discovered formaldehyde. Scientists soon realized that this chemical worked very well to preserve dead bodies. Soon formaldehyde replaced other chemicals as the most common chemical used to embalm bodies.

Different religions have many different ideas about embalming. For example, these religious usually allow embalming:

Some religions, like some Neopagan religions, discourage embalming, but do not forbid it.

Some religions say that embalming is never allowed. These religions include:

All content from Kiddle encyclopedia articles (including the article images and facts) can be freely used under Attribution-ShareAlike license, unless stated otherwise. Cite this article:
Embalming Facts for Kids. Kiddle Encyclopedia.