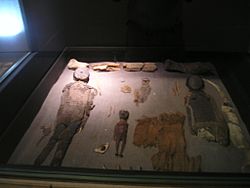 Mummies at the museum in San Miguel de Azapa.

The Chinchorro mummies are mummified remains of people from the South American Chinchorro culture, found in what is now northern Chile and southern Peru. They are the oldest examples of artificially mummified human remains. The oldest are 7,000 years old. The mummies continued to be made until about 1800 B.C.

They were first studied by the Andean archaeologist Max Uhle in 1914. Today, over 280 mummies have been found. About 120 of them are kept at the University of Tarapaca museum. Recently, scientist saw that some of the mummies are melting. This is because the increased humidity due to climate change has let microbes attack the skin.

Shell mounds and bone chemistry suggest that 90% of the diet of these people was seafood.

All content from Kiddle encyclopedia articles (including the article images and facts) can be freely used under Attribution-ShareAlike license, unless stated otherwise. Cite this article:
Chinchorro mummies Facts for Kids. Kiddle Encyclopedia.