Death by Chocolate facts for kids 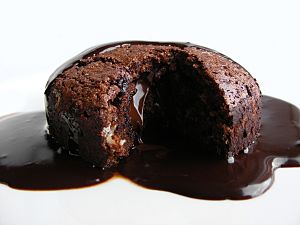 Lava cake has been described as a Death by Chocolate dish

Death by Chocolate is a colloquial descriptive or marketing term for various cakes and desserts that feature chocolate, especially dark chocolate or cocoa, as the primary ingredient. The phrase is trademarked in some countries, and the dessert is a signature dish of Bennigan's restaurants in the United States.

The version of Death by Chocolate offered at Bennigan's consists of many ingredients, including two types of ice cream combined with Twix candy bars, which is dipped in a chocolate sauce and served atop crumbed chocolate cookie crust. The dish is accompanied with a side dish of a heated chocolate topping.

All content from Kiddle encyclopedia articles (including the article images and facts) can be freely used under Attribution-ShareAlike license, unless stated otherwise. Cite this article:
Death by Chocolate Facts for Kids. Kiddle Encyclopedia.