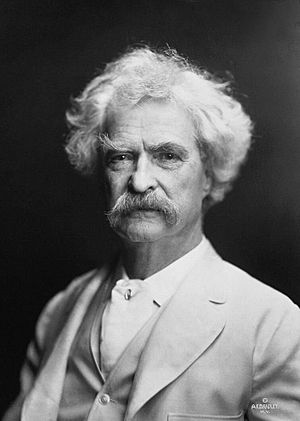 A death hoax is a false report of someone's death.

In some cases, it might be because the person has faked their own death on purpose. In some cases they are mistakes while in most cases, they are intentional. Hoaxes are designed to play on other people's emotions. Sometimes, a death hoax is designed to be a practical joke; however, most are to give the person starting the rumor a sense of power over their victims.

There are often consequences when the person who started the hoax is discovered. The news media has to be especially careful of hoaxes, including death hoaxes. While some people will believe anything, most people resent being tricked. However, it depends on how the story is handled: For example, a death hoax ran in Canadian papers about a hard-drinking, hard-swearing Carcross Parrot who had just died; most forgave the writers since the story was published on April Fools' Day.

Mark Twain is one of the most famous people to be the subject of a death hoax. In his case, the newspapers were just careless. This is when he uttered his famous quote, "The report of my death was an exaggeration." It has often been misquoted as "reports of my death have been greatly exaggerated".

All content from Kiddle encyclopedia articles (including the article images and facts) can be freely used under Attribution-ShareAlike license, unless stated otherwise. Cite this article:
Death hoax Facts for Kids. Kiddle Encyclopedia.