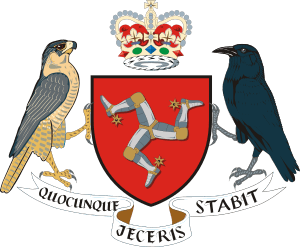 Coat of Arms of the Isle of Man

A deemster (Manx: briw) is a judge in the Isle of Man. The Isle of Man is self-governing. It keeps some of its traditions, and has a long past history.

The High Court of Justice of the Isle of Man is presided over by a deemster. In the appeal division, a deemster and the Judge of Appeal preside. The deemsters also make the Isle of Man's laws official, by reading them out to the people in English and Manx on Tynwald Day.

There are currently three full time Deemsters in the Isle of Man. These are the First Deemster and Clerk of the Rolls (who is also the Deputy Governor), the Second Deemster, and an additional full-time Deemster. Additional deemsters, full-time or part-time, may be appointed from time to time.

The First Deemster, Second Deemster and Judge of Appeal are appointed by the monarch, (acting on the advice of the UK's Secretary of State for Justice). The First Deemster acts in place of the Lieutenant Governor in the latter's absence, or during a vacancy in that office.

All content from Kiddle encyclopedia articles (including the article images and facts) can be freely used under Attribution-ShareAlike license, unless stated otherwise. Cite this article:
Deemster Facts for Kids. Kiddle Encyclopedia.