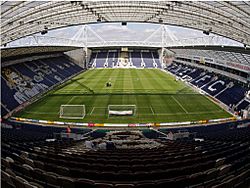 The "new" Deepdale after the new stands were built. Preston North End's security team can be seen preparing the stands for the match.

Deepdale is a football stadium in Preston, Lancashire, England.

Since 1995 Deepdale has changed a lot, the old stands have been knocked down and now it has brand new all-seater stands. Now that the changes are finished, the stadium has 23,408 seats. Other changes made include a new big screen TV to show highlights of the match and new executive boxes where Preston North End's owners and their guests sit.

All content from Kiddle encyclopedia articles (including the article images and facts) can be freely used under Attribution-ShareAlike license, unless stated otherwise. Cite this article:
Deepdale Facts for Kids. Kiddle Encyclopedia.