Deford is an unincorporated community in Tuscola County in the U.S. state of Michigan, located along Bruce/Deckerville Road west of the intersection with Kingston Road (Section 32, North East quarter), north of Kingston and south of Cass City in the southeast corner of Novesta Township. The Deford Post Office with ZIP code 48729 serves the southern portion of the township as well as the northern portion of Kingston Township and areas in the northeast corner of Wells Township.

When the Grand Trunk Western Railroad was built through Deford in 1883, the station was named Bruce after local land owner Elmer Bruce. The community was founded in 1884 by Arthur Newton and named for his friend, Mr. Deford. A post office was also established in 1884. A plat for Deford was filed on July 10, 1885.

Deford's climate is much like that of Flint, approximately 30 or 40 miles to the southwest. During the winter, Deford faces heavy precipitation due to its location on the snow belt that comes through Michigan. The community is also located in a tornado prone region of the thumb area. The average amount of precipitation that falls over the community is 30.6 inches. 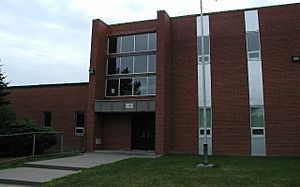 Public education is provided by Cass City Public Schools. The Deford Christian Academy is a private school that had a 2007-08 year enrollment of 23.

All content from Kiddle encyclopedia articles (including the article images and facts) can be freely used under Attribution-ShareAlike license, unless stated otherwise. Cite this article:
Deford, Michigan Facts for Kids. Kiddle Encyclopedia.