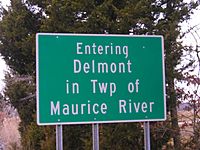 The community was founded by European settlers in 1770. Until 1891, it was called Ewings Neck. The Ewing family was one of the first to settle in the area and a "neck" is a name often given to a stretch of higher ground surrounded by marshes and low-lands.

The New Jersey Department of Corrections Southern State Correctional Facility is in the Delmont area of the township.

All content from Kiddle encyclopedia articles (including the article images and facts) can be freely used under Attribution-ShareAlike license, unless stated otherwise. Cite this article:
Delmont, New Jersey Facts for Kids. Kiddle Encyclopedia.