Dendrobium wassellii, commonly known as the furrowed pencil orchid, is a species of orchid endemic to a small area on Cape York Peninsula. It is an epiphytic or lithophytic orchid with branched stems, cylindrical, furrowed leaves and flowering stems with up to sixty crowded white flowers with a yellow labellum. 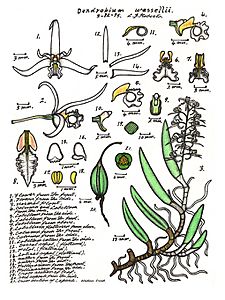 Dendrobium wassellii was first formally described in 1963 by Stanley Thatcher Blake and the description was published in Proceedings of the Royal Society of Queensland. The specific epithet (wassellii) honours Joseph Leathom Wassell who collected insect and orchids on Cape York and sent them to the Royal Botanic Gardens Victoria, although it was not until ten years later when they were sent to the Queensland Herbarium and formally described.

The furrowed pencil orchid grows near the top of rainforest trees, especially hoop pine (Araucaria cunninghamii) in the Iron and McIlwraith Ranges on Cape York Peninsula.

All content from Kiddle encyclopedia articles (including the article images and facts) can be freely used under Attribution-ShareAlike license, unless stated otherwise. Cite this article:
Dendrobium wassellii Facts for Kids. Kiddle Encyclopedia.