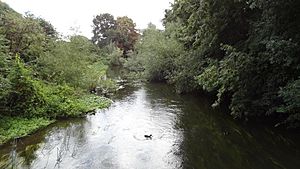 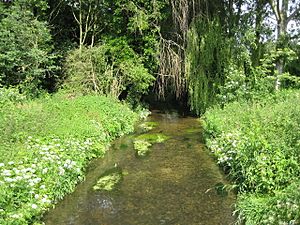 The Colne and Misbourne rivers pass through the park and the Grand Union Canal forms its eastern boundary. It has a variety of wildlife, including herons, kingfishers, damselflies and dragonflies.

There is access from Denham Court Drive and the canal towpath.

Natural England lists Denham Quarry Park as a separate Local Nature Reserve in Buckinghamshire. However, this appears to be an error as the boundaries are shown as almost the same as Denham Country Park, and Denham Quarry is on the other side of the Grand Union Canal in Hillingdon.

All content from Kiddle encyclopedia articles (including the article images and facts) can be freely used under Attribution-ShareAlike license, unless stated otherwise. Cite this article:
Denham Country Park Facts for Kids. Kiddle Encyclopedia.