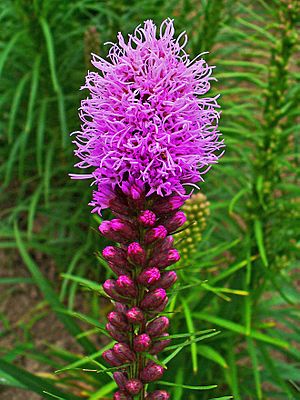 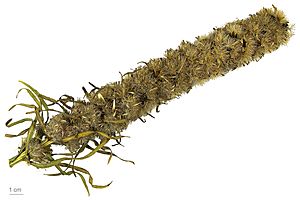 Liatris spicata, the dense blazing star or prairie gay feather, is an herbaceous perennial flowering plant in the sunflower and daisy family Asteraceae. It is native to eastern North America where it grows in moist prairies and sedge meadows.

The plants have tall spikes of purple flowers resembling bottle brushes or feathers that grow 1–5 ft (0.30–1.52 m) tall. The species grows in hardiness zones 3 - 8, stretching from the Midwest to the East Coast, eastern and western Canada.

Common varieties include 'Alba' and 'Floristan White' which are white-flowering cultivars on 18 in (46 cm) tall spikes, 'Callilepsis' with long stems good for cut flowers, 'Floristan Violett' with a strong stem and thick, violet flower spikes preferred by florists, and 'Kobold' which stays small in size with deep purple flowers.

Liatris spicata var. resinosa is found in the southern part of the species's natural range. The variable plants have only 5 or 6 flowers per head and the heads are more widely spaced on the stems; these differences are more pronounced when the plants are found in drier and coastal habitats.

Liatris spicata is a garden flower in many countries around the world, grown for its showy purple flowers (pink or white in some cultivars). They bloom in July through August or September, depending on where in their range they are located.

Under cultivation it is found under many names including button snakewort, Kansas gay feather, blazing star, Liatris callilepis.

Full sun is best and well-drained soil is preferred to prevent rot, though the plants do prefer moist soil. However, the plants do not tolerate wet soil in winter. The plants can tolerant some shade as well as drought but need regular watering during the first growing season to build strong roots.

Plants can be grown from corms (similar to bulbs and tubers) or from seed, or the plants can be bought at garden centres or nurseries.

If amending the soil, the plants prefer soil with high levels of calcium and magnesium and low levels of potassium and phosphorus.

In gardens, Liatris spicata works well planted individually, as a border, and because of its vertical form, it contrasts well with mounded and broad-leaf plants. In informal gardens, large sweeps of plantings work well.

The flowers either fresh or dried work well as cut flowers and have a vanilla scent when dried.

Deer are less likely to eat Liatris spicata than other plants and therefore considered deer-resistant, although deer will eat almost anything when food is scarce.

Liatris spicata was historically used medicinally by Native Americans for its carminative, diuretic, stimulant, sudorific, and expectorant properties. In addition to these uses, the Cherokee used the plant as an analgesic for pain in the back and limbs and the Menominee used it for a "weak heart." The root of the plant is the part most often used. Native Americans also used the plant to treat swelling, abdominal pain and spasms/colic, and snake bites. Currently, the plant is used for a sore throat by gargling an infusion, as an herbal insect repellent, and in potpourri.

All content from Kiddle encyclopedia articles (including the article images and facts) can be freely used under Attribution-ShareAlike license, unless stated otherwise. Cite this article:
Dense blazing star Facts for Kids. Kiddle Encyclopedia.