Derby Theatre is a theatre in Derby. It is in the Intu Derby shopping centre. It used to be known as the Derby Playhouse. It was owned and run by Derby Playhouse Ltd from its opening in 1975 until 2008, when the company ceased operating. The theatre reopened in 2009 as the Derby Theatre under the ownership of the University of Derby. The university use it as a professional and learning theatre. It has a 531 seat main auditorium and a 110-seat studio theatre.

For details of the pre-2009 productions, its building and its original owners, see Derby Playhouse

The Derby Playhouse closed in 2008. The theatre was reopened in October 2009 as the Derby Theatre under the ownership of the University of Derby. The first two productions were by the Derby Gilbert & Sullivan Company who performed The Gondoliers and The Mikado.

The University of Derby originally operated the venue in partnership with Derby LIVE, the city council's performing arts programme. The theatre being used for both visiting professional companies and as a learning and community theatre. This partnership came to end in March 2012. The University continued to operate the theatre with the support of the Arts Council England. From May 2012, Derby Theatre received £923,000 from the Arts Council England to support a three year Learning Theatre Pilot programme. The University gave up to £500,000 per year from its Arts fund. 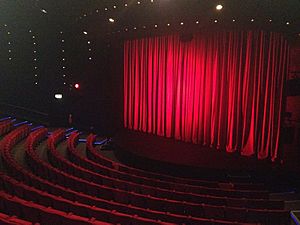 The theatre held a fundraising campaign to help with restoration costs. The main auditorium seating and carpets were refurbished in August 2012. The old Arts College and Metro Cinema building on Green Lane was restored. It is an historic building owned by the University of Derby. It was adapted for the theatre's use. It has spaces for rehearsals, prop storage, and the wardrobe department. In December 2012, it was opened by the theatre's newly appointed Artistic Director, Sarah Brigham; general manager, Gary Johnson; and Vice-Chancellor of the University of Derby, John Coyne.

In November 2013, the Esmée Fairbairn Foundation awarded a grant of £164,000 to the theatre. This was to support the development of its work as a learning theatre and to focus on supporting emerging artists, developing creative skills and working with community groups.

In 2012, the first season of works included Yes, Prime Minister, Funny Peculiar, Horrible Histories and a co-production of The Butterfly Lion in association with New Perspectives Theatre Company and Curve Theatre. Autumn 2012 productions included Radio Times, Three Men in a Boat, Driving Miss Daisy and The Haunting, a musical theatre adaptation of Charlotte's Web in conjunction with The Birmingham Stage Company.

The 2013 season featured productions of The Pitmen Painters, James and the Giant Peach and a new touring production of Birdsong. Since its re-opening, the theatre has staged an annual children's classic during the Christmas season.

In May 2013, the first production commissioned and produced by the theatre under the artistic directorship of Sarah Brigham was Lee Hall’s Cooking with Elvis, directed by Mark Babych. In September 2013, The first show directed by Sarah Brigham was Kes. It featured former Skins actor Sam Jackson in his first stage role. Visiting productions included Go Back for Murder and September in the Ratn and a co-production with the Mercury Theatre, Colchester of The Opinion Makers by Brian Mitchell and Joseph Nixon.

In December 2013, the theatre teamed up with Birmingham Stage Company again to produce Horrible Histories Horrible Christmas, directed by Phil Clark. The author Terry Deary attended the first preview performance and launched the Derby citywide Plus One scheme.

In November 2013, the theatre was recognised for its partnership with the University of Derby by winning the Excellence and Innovation in the Arts award at the 2013 THE Awards.

Blanche McIntyre won the award for Best Director for The Seagull, a co-production with Headlong, Nuffield, Southampton and Derby Theatre at the UK Theatre Awards 2013.

All content from Kiddle encyclopedia articles (including the article images and facts) can be freely used under Attribution-ShareAlike license, unless stated otherwise. Cite this article:
Derby Theatre Facts for Kids. Kiddle Encyclopedia.