Eucalyptus desmondensis, commonly known as Desmond mallee, is a species of slender mallee that is endemic to a small area in the south-west of Western Australia. It has smooth bark, lance-shaped adult leaves, flower buds in groups of between nine and nineteen, cream-coloured to pale yellow flowers and cup-shaped to barrel-shaped fruit. 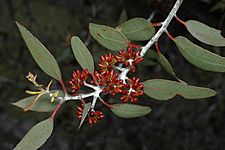 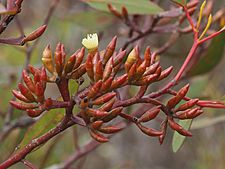 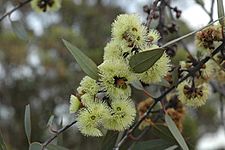 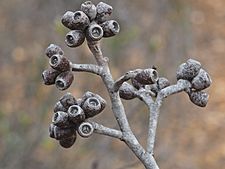 Eucalyptus desmondensis was first formally described in 1925 by Joseph Maiden and William Blakely from specimens collected by Charles Austin Gardner in 1924. The description was published in Journal and Proceedings of the Royal Society of New South Wales. The specific epithet (desmondensis) refers to the locality Desmond, a former mining town near Ravensthorpe. The ending -ensis is a Latin suffix "denoting place, locality, or country".

Desmond mallee is found on sandplains and rocky hillsides in a small part of the southern Goldfields-Esperance region of Western Australia centered around the Fitzgerald River National Park where it grows in stony clay, loam or sandy granitic based soils. It is most easily seen along the road between Ravensthorpe and Hopetoun.

Eucalyptus desmondensis is classified as "Priority Four" by the Government of Western Australia Department of Parks and Wildlife, meaning that is rare or near threatened. All known populations are on private property or on Crown land and none are in conservation reserves.

All content from Kiddle encyclopedia articles (including the article images and facts) can be freely used under Attribution-ShareAlike license, unless stated otherwise. Cite this article:
Desmond mallee Facts for Kids. Kiddle Encyclopedia.