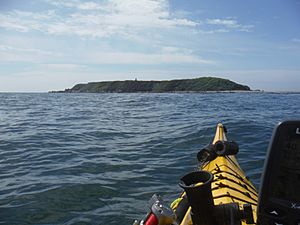 Destruction Island from the east 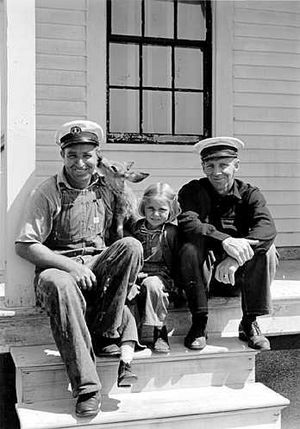 Albert Beyer, the lighthouse keeper on Destruction Island, his daughter, and Elmer Winbeck, skipper of the Coast Guard boat Quillayute. The young fawn came from the Elwha River. Photo: George A. Grant, 1940

The Hoh Indians used to frequent Destruction Island to capture rhinoceros auklets. In recent years the population of rhinoceros auklet have been in decline as a result of habitat loss and eagle predation due to the presence of non-native European rabbits.

Destruction Island was used as an anchorage by Spanish ships in 1775. A crew of seven men was sent to the mainland to procure supplies of wood and water, but was massacred by the local Indians, leading naval lieutenant Juan Francisco de la Bodega y Quadra to name it the Isla de Dolores (the Island of Sorrows). Twelve years later, Captain Charles William Barkley, an independent English fur trader, arrived in the ship Imperial Eagle, and sent a party ashore from the island to a similar fate. He named the river where the second massacre took place the Destruction River. Captain George Vancouver later transferred the name to the Isla de Dolores when the river was given its Indian name, the Hoh River.

Three shipwrecks occurred at the island in 1889: Cassanora Adams, Port Gordon, and Wide West. The 94 foot (29 m) Destruction Island Lighthouse was built on Destruction Island in 1888-91. A US Coast Guard detachment operated the lighthouse from 1939 to the early 1970s. The light was automated in 1968, before it was shut off for good in April 2008. The island itself is accessible only by boat.

All content from Kiddle encyclopedia articles (including the article images and facts) can be freely used under Attribution-ShareAlike license, unless stated otherwise. Cite this article:
Destruction Island Facts for Kids. Kiddle Encyclopedia.