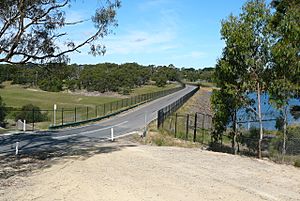 Road crossing across the reserve. 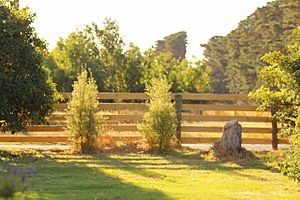 Devilbend Natural Features Reserve is a 1,005 ha (2,480 acres) park on the Mornington Peninsula 55 km (34 mi) south-east of Melbourne, Australia, between Hastings and Mount Martha in the traditional country of the Bunurong people. It contains two decommissioned water-supply reservoirs, Devilbend and Bittern, which were the original reason the land now in the park was not developed and was protected from general public access.

The Devilbend Reservoir, with a capacity of 14,600 ML (520×10^6 cu ft), was built during the 1960s and opened in 1965. It is the largest freshwater body in the Shire of Mornington Peninsula. The two reservoirs provided backup drinking water to the Peninsula until they were made redundant in December 2000 by the completion of a water pipeline between the Cardinia Reservoir and Pearcedale. In September 2006, most of the Devilbend reserve land was transferred to Parks Victoria with the Devilbend Natural Features Reserve being gazetted on 8 March 2007. A Management Plan for the reserve was voted in 2010, and in 2011, a new masterplan aiming to turn the area into a touristic area was prepared.

In 2012, after 6 years of land renovation that required a budget $1.6 million, the Reserve reopened to the public. The reserve was inaugurated by Peter Walsh, and took the name Devilbend Natural Features Reserve on this day. Among the new features of the park, the entrance gateway, the asphalt entrance road, sealed car park, the picnic and barbecue facilities, the walking tracks and the boardwalk.

By the end of 2017, Parks Victoria allowed non-powered paddles to sail on the lake.

Much of the Mornington Peninsula's native bushland has been cleared, and it is estimated that less than 5% of the original habitat remains. Devilbend is one of just a few sites on the Peninsula containing significant areas of remnant native vegetation. Over 200 species of indigenous plants have been recorded in and around the reserve, including trees, shrubs, ground plants, aquatics, orchids and their associated communities. Other sizeable fragments of bushland remaining on the Peninsula are at Point Nepean (333 ha (820 acres)), Green's Bush (1,100 ha (2,700 acres)) and HMAS Cerberus (1,700 ha (4,200 acres)).

Past restrictions on public access to the Devilbend reserve have created favourable conditions for wildlife, as shown by large numbers of waterbirds and frogs recorded there. The 243 ha (600 acres) Devilbend Reservoir has been identified by BirdLife International as an Important Bird Area (IBA) because it supports, seasonally, over 1% of the global population of the near-threatened blue-billed duck. The reserve also contains the only nesting site of the white-bellied sea eagle on the Mornington Peninsula. The growling grass frog and dwarf galaxias have been recorded in the reserve.

Starting in 2010, the reservoir was stocked with 14,000 rainbow trout and 21,000 brown trout. Those first trout stocks were done secretly, and much of the first was eaten by native perch.

The Devilbend Foundation was created in 2002 to lobby against fishing in the Devilbend reserve, and against horse-riding in the vicinity, arguing it would compromise the natural equilibrium of the park In November 2017, the Victorian Fisheries Authority released 180 thumping brown trout (2.5 kg each, grown at the Snobs Creek hatchery) into the Reservoir to «improve the mixed fishery». 100,000 trout were stocked in the Reservoir between 2010 and 2017.

All content from Kiddle encyclopedia articles (including the article images and facts) can be freely used under Attribution-ShareAlike license, unless stated otherwise. Cite this article:
Devilbend Natural Features Reserve Facts for Kids. Kiddle Encyclopedia.