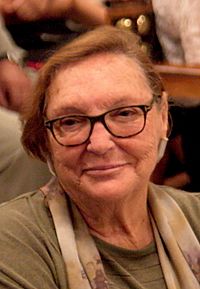 Diana Garrigosa Laspeñas (10 November 1944 – 10 February 2020) was a Spanish Catalan economist and teacher. She was married to the 127th President of the Generalitat of Catalonia Pasqual Maragall. After her husband was diagnosed with Alzheimer's disease, she founded the Pasqual Maragall Foundation for research of the disease. She served as the foundation's president from 2008 until her death in 2020. She starred in the 2010 documentary movie Bicicleta, cullera, poma with her husband.

All content from Kiddle encyclopedia articles (including the article images and facts) can be freely used under Attribution-ShareAlike license, unless stated otherwise. Cite this article:
Diana Garrigosa Facts for Kids. Kiddle Encyclopedia.