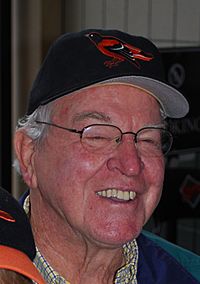 Richard Wallace Hall (born September 27, 1930) is an American former professional baseball player. He played in Major League Baseball (MLB) as a right-handed pitcher from 1952 to 1957 and from 1959 to 1971. He is best known as a member of the Baltimore Orioles team that won three American League pennants and two World Series championships between 1966 and 1970. He also played for the Pittsburgh Pirates, the Kansas City Athletics and the Philadelphia Phillies.

Hall was born in St. Louis, Missouri. He graduated from Swarthmore College. He is the older brother of linguist and fellow Swarthmore graduate Barbara Partee.

All content from Kiddle encyclopedia articles (including the article images and facts) can be freely used under Attribution-ShareAlike license, unless stated otherwise. Cite this article:
Dick Hall (baseball) Facts for Kids. Kiddle Encyclopedia.