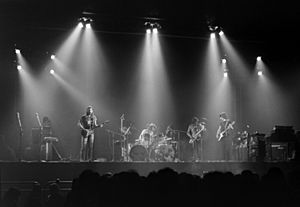 Parry (second from right) playing with Pink Floyd in 1973

Richard Parry (born 22 December 1942) is an English saxophonist. He has appeared as a session musician on various albums by modern bands and artists, and is probably best known for his solo parts on the Pink Floyd songs "Money", "Us and Them", "Shine On You Crazy Diamond" and "Wearing the Inside Out". He also played on the Bloodstone album Riddle of the Sphinx.

Born in Kentford, Suffolk, Parry started his career as a saxophonist in The Soul Committee, a mid-1960s band in Cambridge. He was a friend of Pink Floyd guitarist David Gilmour who played in Jokers Wild, another band in Cambridge. Contrary to some reports, Parry did not play in Jokers Wild. Some years later, Gilmour asked him to play on Pink Floyd studio albums, including The Dark Side of the Moon, Wish You Were Here, and The Division Bell, as well as in every Pink Floyd live performance between 1973 and 1977, and the 1994 world tour. He also toured as part of the Who's brass section on their 1979–1980 tours.

He played saxophone on "Celestine" for the 1997 album Big Men Cry by Banco de Gaia.

Parry appeared on Gilmour's live dates in 2001 and 2002, one performance of which was released as David Gilmour in Concert. He also played on the 2006 On An Island tour in Europe, the United States and Canada, performing saxophone on "Shine On You Crazy Diamond", "Wearing the Inside Out", and "Then I Close My Eyes". Shows from the Royal Albert Hall in London, and from the Shipyard in Gdańsk, Poland were released as the DVDs Remember That Night and Live in Gdańsk, respectively.

He appeared at the Pink Floyd reunion at Live 8, where he played his saxophone part on "Money". In 2009, he toured Europe and South Africa with the Violent Femmes.

All content from Kiddle encyclopedia articles (including the article images and facts) can be freely used under Attribution-ShareAlike license, unless stated otherwise. Cite this article:
Dick Parry Facts for Kids. Kiddle Encyclopedia.