The Dinesen-Motzfeldt-Hettninger Log House is located in the community of Mole Lake, Wisconsin in the city of Crandon, Wisconsin. It was added to the National Register of Historic Places in 2005. 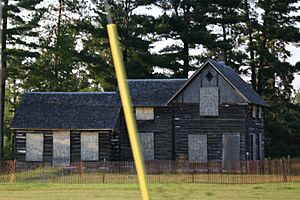 The house was first occupied by William Johnson. It was later occupied by Danish immigrant Wilhelm Dinesen, the father of Karen Blixen. During the time Dinesen lived in the house, he called it "Frydenlund", translating to 'grove of joy.' Later, the house became the home of Ludwig Motzfeldt, who also ran a post office of the building and served as Treasurer of Forest County, Wisconsin. In 1905, Joseph and Hattie Hettinger purchased the house.

All content from Kiddle encyclopedia articles (including the article images and facts) can be freely used under Attribution-ShareAlike license, unless stated otherwise. Cite this article:
Dinesen-Motzfeldt-Hettinger Log House Facts for Kids. Kiddle Encyclopedia.