Diuris aequalis, commonly called the buttercup doubletail, is a species of orchid which is endemic to New South Wales. It has two rolled leaves and spikes of two to five golden-yellow to orange flowers and is classified as "vulnerable". 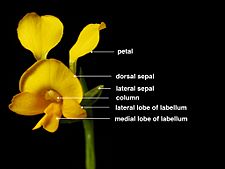 Diuris aequalis was first formally described in 1876 by Robert D. FitzGerald from a previously unpublished description by Ferdinand von Mueller. The description was published in Fitzgerald's book, Australian Orchids. The specific epithet (aequalis) is a Latin word meaning "like", "same" or "uniform".

Buttercup doubletail orchid occurs on the ranges and tablelands of New South Wales between Braidwood and the Kanangra-Boyd National Park where it grows in forest and low open woodland with a grassy understory, often on gentle slopes.

Only about 200 individual plants of D. aequalis are known, mostly on roadsides and on agricultural land. It is listed as "Vulnerable" (VU) under the Australian Government Environment Protection and Biodiversity Conservation Act 1999 (EPBC Act). The threats to its survival include land clearing, grazing, road maintenance and illegal rubbish dumping.

It was one of the plants targeted in the 2015 Save a Species Walk.

All content from Kiddle encyclopedia articles (including the article images and facts) can be freely used under Attribution-ShareAlike license, unless stated otherwise. Cite this article:
Diuris aequalis Facts for Kids. Kiddle Encyclopedia.