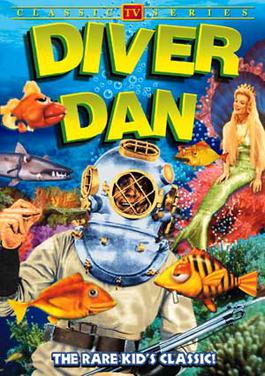 Diver Dan is a series of 104 seven-minute live-action shorts made for children's television from 1960 to 1970. Made by Brian Cartoons, it was syndicated (mainly to NBC affiliates) and distributed by ITC Entertainment. The shows were sometimes re-edited into half-hour (including commercials) blocks by local stations.

The series featured the adventures of a diver in an old-fashioned diving suit who talked to the passing fish. The series was filmed in live action with puppet fish; the underwater effect was achieved by shooting through an aquarium.

Diver Dan debuted in 1960, the brainchild of Philadelphia, Pennsylvania, cartoonist J. Anthony (John) Ferlaine, as a spinoff of his comic strip, Fish Tales. Ferlaine, who worked as an art director at Philadelphia's CBS affiliate WCAU-TV, produced two Fish Tales live-action marionette pilots. When CBS did not pick up the show, Ferlaine and promoter Martin Young partnered with Philadelphia producer Louis W. Kellman, who with his staff produced local TV spots and film shorts and filmed NFL football games. They produced the shorts over nine months and syndicated them.

In New York City, Diver Dan shorts ran as part of Felix & Diver Dan, a 30-minute children's show airing from January 4, 1960, to August 31, 1962, which also included Felix the Cat. In Chicago during the 1960s, Diver Dan was regularly shown on the WGN-TV show "Ray Rayner and His Friends" even though Rayner would frequently read on-air letters from children requesting that he get other cartoons.

The series opening and closing themes were written, performed, and sung by the show's sound engineer, Jack Sky, in a double tracked recorded voice.

Below in the deep there's adventure and danger;
That's where you'll find Diver Dan!
The sights that he sees are surprising and stranger
Than ever you'll see on the land!

He moves among creatures
Of frightening features:
Flashing teeth, slashing jaws,
Flapping fins, snapping claws!
He protects and he saves
His friends under the waves;
That's where you'll find Diver Dan!

Alpha Video released two collections of Diver Dan episodes on DVD (Region 0). All episodes in both volumes are black & white.

Three DVD (Region 0) releases have also been produced by East West Entertainment LLC. All episodes in all three volumes are black & white.

Note: Each of the first 8 episodes has its own chapter stop except for Episode #09. It continues immediately after Episode 08. Pressing >> skips Episode 09 and cycles back to Episode 01.

Dell Publishing issued a Diver Dan comic book, as issue #1254 (February–April 1962) of its series Four Color. A follow-up issue #2 was published dated June–August 1962 and then was cancelled. Diver Dan episodes are also available at tv4u.com.

In 1964, songwriter and record producer Tony Piano of Columbia Records put out a children's album based on the series titled Diver Dan and the Bermuda Onion. With the exception of the theme song, which he legally borrowed from the series, Piano wrote the story, music, and lyrics for the album. His inspiration for producing it was his two young children at the time, who were 'hooked' on the Diver Dan TV series. In addition to producing the album, Piano took on three of the roles: Trigger, Sam the Sawfish, and Skipper Kipper. Aiding Piano on the album was the famous comedian Del Close, playing the role of Baron Barracuda. "Birthday House" and children's album star Kay Lande played Minerva the Mermaid.

The Nickelodeon animated children's show SpongeBob SquarePants seems to have been somewhat influenced by Diver Dan, either in directly parodying or by paying homage to it. In the SpongeBob SquarePants episode, "One Krabs Trash", Mr. Krabs goes to a graveyard to retrieve a "soda-drink-hat", and there is a gravestone that reads "Diver Dan".

All content from Kiddle encyclopedia articles (including the article images and facts) can be freely used under Attribution-ShareAlike license, unless stated otherwise. Cite this article:
Diver Dan Facts for Kids. Kiddle Encyclopedia.