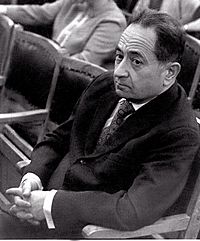 Klebanov studied music academically as a pianist, violist, conductor, and composer, and became a professor of composition at the Kharkiv Conservatory. In the late 1930s and early 1940s a couple of ballets, a violin concerto, and a symphony received major performances in Moscow and Kiev. Unfortunately, the first symphony "In Memoriam to the Martyrs of Babi Yar" (1945) fell afoul of Stalinist critics who found it anti-patriotic. Being accused of distortion of the historic truth about the Soviet people and of national narrow-mindedness it was exiled for a life in archives. Stalin made his infamous attack on Soviet artists. The Soviet Composers' Union adopted the unwritten rule that one composer would be selected to take the heat for all of them—Klebanov was it. Although Klebanov was spared exile to Siberia, or worse, he was relegated to an obscure existence and spent most of this period composing politically correct works of "socialist realism" with titles like Ode for the Party and "First of May" Symphony. Following thirty years in de facto exile, Klebanov thawed out with the rest of the USSR in the 1980s.

In 1983, Mela Tenenbaum (violinist/violist) was in Kharkiv to play a viola concerto written for her by a pupil of Klebanov, whom she met after the concert. Klebanov suggested Ms. Tenenbaum perform his own Violin Concerto, and after the success of that venture the following season, he wrote a viola concerto expressly for her. This work had a positive reception in several Russian cities and Klebanov found his long-stifled creative energies reviving. Another new work followed, Japanese Silhouettes for soprano, viola d'amore and instrumental ensemble, based on haiku texts translated into Russian. This work was recorded for Radio Kiev with soprano Natalia Kraftzova, and a "rehabilitation" of Klebanov seemed imminent. But the composer died in 1987, just short of his 80th birthday, and soon artistic chaos engulfed the disintegrating Soviet Union. His music disappeared and was thought to have been lost in a fire and flood which destroyed the Musical Foundation building where his scores were kept.

All content from Kiddle encyclopedia articles (including the article images and facts) can be freely used under Attribution-ShareAlike license, unless stated otherwise. Cite this article:
Dmitri Klebanov Facts for Kids. Kiddle Encyclopedia.