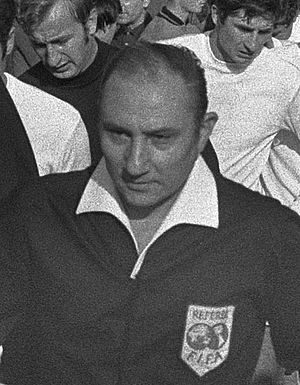 Doğan Babacan (30 November 1929 – 18 May 2018) was a Turkish football referee. He was the first Turkish referee to supervise a match in FIFA World Cup history. He was born in Istanbul.

Later he was referee for the 1975 UEFA Super Cup final between FC Bayern Munich and FC Dynamo Kyiv. He retired from international refereeing in 1978.

All content from Kiddle encyclopedia articles (including the article images and facts) can be freely used under Attribution-ShareAlike license, unless stated otherwise. Cite this article:
Doğan Babacan Facts for Kids. Kiddle Encyclopedia.