The Dollywood Foundation is a non-profit organization founded by Dolly Parton, with headquarters in Pigeon Forge, Tennessee. Shortly after the opening of the Dollywood theme park in 1986, the Dollywood Foundation was created in April 1988, and began by offering scholarships to local high school students. From there it grew into the Imagination Library, started in 1995, which distributes free books to children monthly, up until the age of 5. The Dollywood Foundation grew again into the My People Fund, which started in 2016 after wildfires ripped through Tennessee. The current President of the Dollywood Company is Craig Ross. Today, the foundation continues to support people in need by providing scholarships and awards to those who deserve them and provides support to countless non-profit organizations that aim to improve the quality of life to children and others in need. 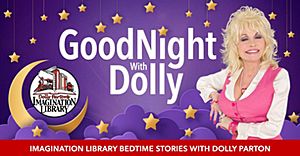 The Imagination Library is a free children's book gifting program started by Dolly Parton in 1995. It is based at her Dollywood theme park near Pigeon Forge, Tennessee. The program started by offering every child in Sevier County, Tennessee, the area where Parton was born and raised, a free age-appropriate book each month in the mail until the age of five, regardless of family income.

In 2000, the Imagination Library became so popular that Dolly announced that she wanted to make the program available to any community that would partner with her and support it locally. The program has since expanded to over 1,800 local communities in the US, Canada, Ireland and the United Kingdom. The program can be implemented in other communities by private or public non-profit organizations, and the Foundation is responsible for the distribution of books in those participating communities and the database that manages the children's information.

In 2018, Parton celebrated the delivery of the 100 millionth book since the inception of the program. hosted an event in February of 2018 commemorating the milestone with Parton holding a Story Time to children attending the event. The Imagination Library program currently sends roughly 1.3 million books to children every month. The program has drastically improved literacy for the children enrolled.

In April 2020 during the Covid-19 pandemic "Goodnight with Dolly" premiered on Youtube where Dolly reads stories to children from "Dolly Parton's Imagination Library".

In November 2016, two teenage boys were charged with setting a fire in the Great Smoky Mountains National Park, known as the 2016 Great Smoky Mountains wildfires, which killed fourteen people and burned down thousands of homes and businesses. The death toll included two children and a woman who died escaping the flames. Dolly gathered her Dollywood companies (Dolly Parton’s Stampede, Dolly Parton’s Lumberjack Adventure, Pirates Voyage, The Dollywood Company) and joined together to establish the ‘My People Fund’ which ultimately donated $1,000 a month to all families who lost their homes in the fire. Those collecting charitable donations from the Dolly Foundation, could collect their funds for up to six months. Anyone can donate to the My People Fund online or by mail. As the Dolly Foundation website states, any family whose primary residence (renters or homeowners) is a complete loss or is uninhabitable due to the wildfires in Sevier County are eligible for charitable donations. Significant donors to the fund include Verizon, Tanger Outlets, Miley Cyrus’ Happy Hippie Foundation, CoreCivic and The Blalock Company. The My People Fund helped more than 900 families and raised over $9 million.

When the Imagination Library reached its 100-million total book distribution mark, Dolly Parton announced she would be awarding a scholarship to a participant in the library’s program. In November 2016, Parton granted a $30,000 scholarship to a two-year-old girl, one of the library’s newest participants. The little girl was announced as the winner during the Pure & Simple tour stop in Pigeon Forge, Tennessee. The money was placed in an account that will hold the money until the girl enrolls in college. The scholarship, after the 16-year wait, will amount to nearly $50,000.

The Chasing Rainbows Award was created by the National Network of State Teachers of the Year (NNSTOY) in Parton's name. First presented to Dolly in 2002, the award is now given annually to a deserving teacher who has overcome hardship. The Imagination Library has since partnered with the NNSTOY.

By 2006 the Dollywood Foundation’s Imagination Library had spread to 471 communities in 41 states. The overall rating of the organization was given 3 out of 4 stars by charity navigator. The foundation later spread to the United Kingdom, Australia and Canada. The program helps about 1 million children each month. It is broken down into 6 groups that give recommendations on books depending on when the child was born.

The foundation also gives out scholarships. In 1991 Dolly Parton launched the Buddy Program that made you and one other sign a contract that both you and your buddy must graduate and upon completion you would both receive $500. The Buddy Program caused the drop-out rate to go down to 6% and kick started her community into creating initiatives to keep kids in school. Awards are made in the following areas: music, academics, and the environment.

In its Form 990’s the foundation reports about 60% of its total revenue go to contributions but a total of around 80% goes to the program expenses. About 20% go to investments. The company’s total liabilities are about 2 million. The foundation scored 3 out of 4 stars on their overall score and rating on their most recent form 990 as of 12/01/2016.

All content from Kiddle encyclopedia articles (including the article images and facts) can be freely used under Attribution-ShareAlike license, unless stated otherwise. Cite this article:
Dollywood Foundation Facts for Kids. Kiddle Encyclopedia.