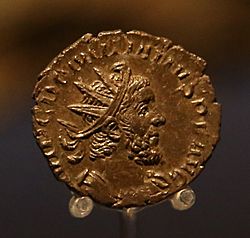 Domitianus was probably a Roman soldier who was acclaimed emperor during the reign of Aurelian.

He was in northern Gaul in late 270 or early 271 AD. He struck gold coins to advertise his claim to the throne. This claimant did not survive the year. He is mentioned by the Byzantine historian Zosimus and also in the Historia Augusta, a collection of biographies.

All content from Kiddle encyclopedia articles (including the article images and facts) can be freely used under Attribution-ShareAlike license, unless stated otherwise. Cite this article:
Domitianus II (usurper) Facts for Kids. Kiddle Encyclopedia.