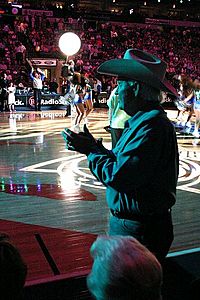 Donald J. Carter (July 5, 1933 – February 14, 2018) was an American investor and businessman. He was born in Little Rock, Arkansas. He was a founding owner of the Dallas Mavericks of the National Basketball Association (NBA) and the Dallas Sidekicks of the Major Indoor Soccer League (MISL). He was known for always wearing a cowboy hat.

All content from Kiddle encyclopedia articles (including the article images and facts) can be freely used under Attribution-ShareAlike license, unless stated otherwise. Cite this article:
Don Carter (businessman) Facts for Kids. Kiddle Encyclopedia.