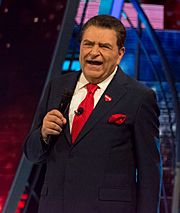 Mario Luis Kreutzberger Blumenfeld (born December 28, 1940) is a Chilean television producer and television personality who is known for being the host of Sábado Gigante and Don Francisco Presenta.

All content from Kiddle encyclopedia articles (including the article images and facts) can be freely used under Attribution-ShareAlike license, unless stated otherwise. Cite this article:
Don Francisco Facts for Kids. Kiddle Encyclopedia.