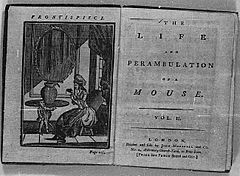 Title page and frontispiece of The Life and Preambulation of a Mouse, volume 2

Dorothy published her first books anonymously. She then published under the pseudonyms M. P. and Mary Pelham. This was common practice among female authors in that period.

Dorothy's most famous book was The Life and Perambulation of a Mouse. This was published in 1784. Some other books of hers are Anecdotes of a Boarding School, or an antidote to the vices of those Establishments (1790), Little Stories for Little Folks (about 1785), and The Village School (1795). Most of her stories had moral lessons.

Dorothy was probably born in Woodford, which was part of Essex at the time. Her father was Thomas Kilner (1719–1804), a public servant and landowner. Her mother was Frances Kilner (née Ayscough; 1718–1768). Dorothy was the youngest of five children. The family lived in Maryland Point.

Dorothy was inspired to write through her friendship with Mary Ann Maze (Mary Ann Kilner, 1753–1831). The two became friends when they were children. They wrote many letters to each other on religious and personal matters. The letters were usually written in verse. Maze later married Dorothy's brother, Thomas Kilner (1750–1812) in 1774. Dorothy moved into their house in Spitalfields, and helped to raise their five children.

Both Dorothy and Mary Ann became writers, and wrote many books for children. Their books were published by John Marshall. Copies of their books were found long after their deaths in a trunk in their home in Maryland Point. Several titles continued to be reprinted for many years.

All content from Kiddle encyclopedia articles (including the article images and facts) can be freely used under Attribution-ShareAlike license, unless stated otherwise. Cite this article:
Dorothy Kilner Facts for Kids. Kiddle Encyclopedia.