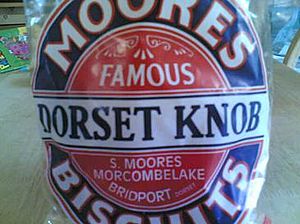 A Dorset knob is a hard dry savoury biscuit which is now produced by only a single producer, for a limited time of the year.

Dorset knobs are made from bread dough which contains extra sugar and butter. They are rolled and shaped by hand, and baked three times. Once cooked, they are very crumbly and rather like very dry stale bread or rusks in consistency.

They are named after their shape's resemblance to Dorset knob buttons, but have also been compared, in size, to door knobs.

Dorset knobs are typically eaten with cheese (for example, Dorset Blue Vinney). Dorset knobs were said by his parlour maid to have been a favourite food of local author Thomas Hardy. As they are so hard, they are also eaten by first soaking them in sweet tea.

In the past there were a number of producers of Dorset knobs. Today the only firm to produce them commercially is Moores Biscuits, which used to be sited in Morcombelake four miles west of Bridport in the west of the county of Dorset in England but has now moved into Bridport itself. The Moores family have baked biscuits in Dorset since before 1860. The bakery was established in 1880 by Samuel Moores and manufactures a variety of traditional biscuits in addition to the Dorset knob. Dorset knobs are only produced during the months of January and February. They are normally sold in a distinctive and traditional tin.

A Dorset knob throwing competition was held at a festival in the Dorset village of Cattistock every year on the first Sunday in May. The record throw of 29.4 metres (96 ft) was set in 2012. Other events at the festival included a knob and spoon race, knob darts, knob painting and guess the weight of the knob. In 2017, the Dorset knob-throwing competition moved from Cattistock to Kingston Maurward House but was cancelled in 2018, the plan being to make it a biennial event from 2019.

All content from Kiddle encyclopedia articles (including the article images and facts) can be freely used under Attribution-ShareAlike license, unless stated otherwise. Cite this article:
Dorset knob Facts for Kids. Kiddle Encyclopedia.