The Dort Federal Credit Union Event Center (originally IMA Sports Arena and formerly Perani Arena and Event Center) is a sports, entertainment and convention venue located in Flint, Michigan, United States. It opened in 1969 and is the home of the Flint Firebirds who play in the Ontario Hockey League.

The main arena of the complex, the largest exhibit hall of complex, features 29,280 square feet (2,720 m2) of space and can accommodate 4,021 for ice hockey and 6,069 for concerts, plus 400 in standing room. The second arena in the complex features 27,206 square feet (2,527.5 m2) of space. Both arenas are frequently used for trade shows, hockey games and other sports. In addition, the main arena is used for concerts.

Initially named the IMA an acronym for the Industrial Mutual Association. Being the second such complex in Flint, MI. named the IMA. The IMA Auditorium was turned into part of the AutoWorld complex. 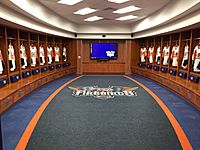 On January 13, 2015, the Plymouth Whalers of the Ontario Hockey League announced they would relocate to Flint and play at Dort Federal Event Center, with OHL approval. That team is now known as the Flint Firebirds.

Local high schools and colleges use the arena for their commencement ceremonies. Perani Arena is also usually the first stop for the Shrine Circus every year. The Perani Arena also holds the General RV Show every year.

The Michigan Pirates of the Continental Indoor Football League (formerly based in Port Huron) played their first and second-round playoff games at the Perani Arena, hoping Flint would be a potential relocation site. After the Pirates folded, Perani Arena was home to the CIFL expansion team Flint Phantoms for the 2008 season.

All content from Kiddle encyclopedia articles (including the article images and facts) can be freely used under Attribution-ShareAlike license, unless stated otherwise. Cite this article:
Dort Federal Credit Union Event Center Facts for Kids. Kiddle Encyclopedia.