Dovrefjell is a mountain range which forms a natural barrier between Southern Norway and the Trøndelag region. In 1974 the Norwegian government established a national park measuring 256 square kilometers, to protect its beautiful nature and the rich plant and animal life. The size was increased in 2002 to 1693 square kilometers to cover a larger portion of the mountain range.

The highest mountain peak in the range is Snøhetta. It is 2,286 meters above sea level. There was once a gold mine on the mountain but it closed at the end of the 17th century.

The main south-north highway (European route E6) in Norway and a railway both travel over Dovrefjell. The highway is open all year, but is sometimes closed for short periods during heavy winter snowfall. The railway line is named Donvrebane and it began operating in 1921.

"Enige og tro til Dovre faller" (United and loyal until the mountains of Dovre crumble).

The mountain Dovre was chosen since it has an important part in Norwegian history, where Dovrefjell represents the eternal, unity and democracy.

The oath was used during a difficult period in the 1800s when Norway was trying to get a new identiity after going out of a union with Denmark and when the union with Sweden came to an end in 1905. 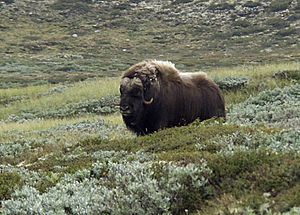 All content from Kiddle encyclopedia articles (including the article images and facts) can be freely used under Attribution-ShareAlike license, unless stated otherwise. Cite this article:
Dovrefjell Facts for Kids. Kiddle Encyclopedia.