Dresser was a small town in Steuben Township, Warren County, Indiana, United States. It was founded shortly before the turn of the 20th century and consisted of several residences and a post office. The post office operated only from 1899 to 1903. The town was named after Paul Dresser, the American songwriter who wrote "On the Banks of the Wabash, Far Away" (which became Indiana's state song); Harvey Porter Layton, the first postmaster, had met Dresser at the Hotel Mudlavia and was so impressed with the man that he named the town after him. 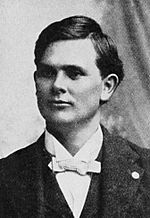 All content from Kiddle encyclopedia articles (including the article images and facts) can be freely used under Attribution-ShareAlike license, unless stated otherwise. Cite this article:
Dresser, Indiana Facts for Kids. Kiddle Encyclopedia.