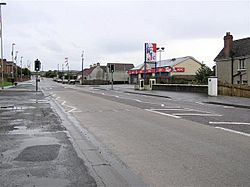 Drumahoe (from Irish Droim na hUamha, meaning 'ridge of the cave') is a village and townland in County Londonderry, Northern Ireland. It lies to the east of Derry. It is home to Institute F.C., an NIFL Championship football club. The busy A6 road from Belfast to Derry passes through the townland. It is situated within Derry and Strabane district.

All content from Kiddle encyclopedia articles (including the article images and facts) can be freely used under Attribution-ShareAlike license, unless stated otherwise. Cite this article:
Drumahoe Facts for Kids. Kiddle Encyclopedia.