Duck Reach Power Station was the first publicly owned hydro-electric plant in the Southern Hemisphere, and provided the Tasmanian city of Launceston with hydro-electric power from its construction in 1895 to its closure in 1955.

The site was picked by Launceston city surveyor and engineer Charles St John David in 1892.

The penstock ran diagonally down the hill into the centre of the rear of the power station where it channeled in to successively smaller pipes and finally to eight Siemens turbines.

The tunnel was drilled to a length of 850 metres (2,790 ft) at a 1 to 110 grade. The tunnel was cut through the hill side instead of being piped around and it took 16 months to complete using pneumatic drills. Dolerite is so hard it took one week of eighteen 8-hour shifts cutting from both ends of the tunnel to cut just 2.5 metres (8 ft 2 in) however the average speed of the drilling was about 5 metres (16 ft) a week. Two men were killed in accidents. When both ends met it was found that the accuracy was within 1 inch. 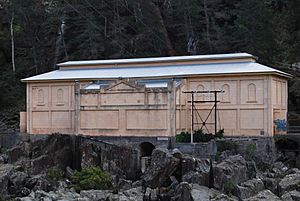 The Duck Reach Power Station first operated on a trial basis on the evening of the 10th of December 1895, when it was used to illuminate some of Launceston's streets using arc lights. On the 1st of February 1896, the hydro-electric power system was officially switched on, remaining in operation until 1955.

The following is paraphrased from the display plaques now within the power station:

Originally the installation had a capacity of 75 kW DC, provided by five 15 kW dynamos, and 360 kW AC, provided by three 120 kW alternators. The turbines were manufactured by Gilbert Gilkes and Co., whilst the dynamos and alternators were built by Siemens and Co.. All alternating-current (AC) supply was single-phase. By 1906 demand had risen and it became necessary to upgrade the plant. This was done by removing much of the original equipment and replacing it with four 445 hp Francis turbines manufactured by Kolben and Co. of Prague, each coupled to a single 300 kW three-phase alternator again built by Siemens and Co.. This raised the AC capacity of the station to 1.2 MW. The original DC equipment remained in use.

Again by 1926, this had become inadequate, and to ease the problem a new 0.88-megawatt (1,180 hp) turbine coupled to an 800 kW alternator was added alongside the existing machinery. To drive this new turbine a timber flume and a masonry aqueduct was constructed, running from Deadmans Hollow around the bend in the South Esk River to the slope immediately behind the Power Station, where it was led into a new steel penstock running alongside the original one. The addition of this new turbine and alternator raised the capacity of the station to 2 megawatts (2,700 hp). In the photograph above, the left-hand penstock is the newer one.

One of the original Siemens and Co. 15 kW DC dynamos, dating from 1895, is preserved and on display within the station.

The suggestion to create a museum at Duck Reach was first mooted in December 1956 in a letter to the editor of Examiner by Mr Michael Shari and of Hobart. In his letter of 17 December 1956 he suggested that the Duck Reach Power Station, with state backing of the Launceston City Council, be established as a technological museum. Mr Sharland at that time was Secretary of the Scenery Preservation Board and an authority on early Tasmanian buildings.

Later that month, in another letter Mr A.R. Evershed of Launceston endorsed Mr Sharland’s letter stating that ‘probably the original plant was the first, or one of the first high tension alternating current hydroelectric plants for long transmission in the world’ and that ‘it would certainly be a crime to destroy such interesting historical matter’.

In late March 1957 the state Hydro Electric Commission offered the station to the Launceston City Council stating that ‘if it is left unattended it will soon deteriorate and Launceston will lose a unique beauty spot which attracts thousands of people each year’. The Scenery Preservation Board at the time was prepared to donate old machinery for exhibits.

The Director of the Queen Victoria Museum was asked by the council to report on the matter. The Director of the museum recommended to council to decline the offer saying that ‘somehow I can’t help but feel that it is a little unfair to suggest that the council would be to blame if these buildings and bridge were demolished. After all the Hydro owns them and has used them and surely it is the responsibility of the Hydro Electric Commission or the Scenery Preservation Board to preserve these government assets’. It seems he was very unenthusiastic.

Some twenty years later the ‘Launceston National Conservation Study’ suggested that the building could be used as a museum of industrial archaeology related to its history.

In the study ‘Conservation in Practice’ by Lionel Morrell 1979, it is suggested that the building be used as a tourist attraction or restaurant.

In the ‘Riveredge Study’ by Donald Goldsworthy 1980, it is suggested that:

a) the power station be rehabilitated

b) the suspension bridge be reconstructed

c) the stone cottages be re-evaluated

d) the site be developed and that the Trevallyn State Recreational Area be improved.

In 1982, in the study 'Duck Reach and the Electric Light, Launceston' by Mark Kozakiewicz 1982, the following suggestions were investigated:

1) The reuse of the Duck Reach Power Station as a museum of early Tasmanian hydro electric power development.

2) The rehabilitation of the old suspension bridge to link the two sides of the South Esk River.

3) The reuse of the engineers' cottages for support services.

4) The establishment of walks from the power station.

5) Examine the possibilities for relating the activities of the Trevallyn State Recreational Reserve to activities at the power station.

In the ‘Cliff Grounds Reserve Interim Management Plan’ 1982 by the Launceston City Council Parks and Recreation Department, recommendations were made similar to those made in the ‘Riveredge Study’.

In 1995 on the centenary of its first opening, the power station was made weatherproof, the suspension bridge restored and the building re-opened as a museum. The Tasmanian Legislative Council Hansard of April 2011 records a lengthy debate in which Kerry Finch MLC for Rosevears suggests’ the resurrection of the Duck Reach Power Station as a working mini-power station’ as a means for getting more "water down the Gorge". It would be an understatement to suggest that this has been a favourite discussion point in Launceston for longer than many would like to remember as a possible solution to clear some of the silt in Home Reach where the Esk Rivers meet to form the Tamar River.

In March 2012 the Launceston City Council voted in favour of investigating the redevelopment of the historic Duck Reach power station for power generation with initial interest from Hydro Tasmania.

All content from Kiddle encyclopedia articles (including the article images and facts) can be freely used under Attribution-ShareAlike license, unless stated otherwise. Cite this article:
Duck Reach Power Station Facts for Kids. Kiddle Encyclopedia.