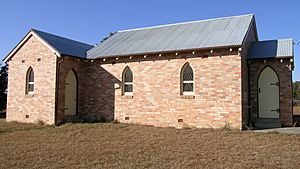 In 1838 John Baker and several others left Sydney to seek land and setup stations on the Northern Tablelands. After the others selected their land Baker continued north to secure the lease of 40,000 acres (160 km2), which he called "Dareel Plains", later to become Dundee. By 1844 the property had been sold several times before Major Archibald Clunes Innes took it over that year. At one stage Innes was one of the wealthiest men in the Colony, but suffered heavily during the 1840s depression and was declared bankrupt in 1852. In 1845 the newly established Dundee flour mill was the first flour mill north of Aberdeen, New South Wales. Major Innes built the ‘Golden Fleece’ Hotel at Dundee in 1847, to become one of the first three hotels built in New England. The large colonial style brick building was the first important building to be erected near the shallow river crossing.

In 1989 the Severn River Rail Bridge, 6 km west-south-west of Dundee and 18 km north-north-east of Glen Innes on the Main North railway line, was listed on the Register of the National Estate. The bridge consists of a series of timber trusses which was considered a significant technical accomplishment. When completed it was the longest timber truss bridge in Australia.

Little else remains of the village that once existed there, aside from the church, a sports ground and the cemetery.

The surrounding district supports sheep and beef cattle grazing plus some tourism.

All content from Kiddle encyclopedia articles (including the article images and facts) can be freely used under Attribution-ShareAlike license, unless stated otherwise. Cite this article:
Dundee, New South Wales Facts for Kids. Kiddle Encyclopedia.