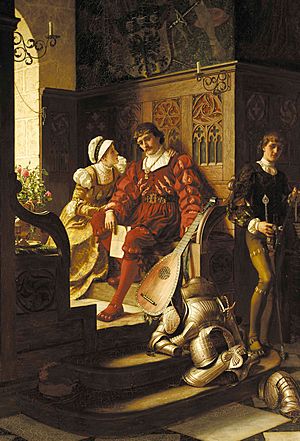 Duty is a term that conveys a sense of moral commitment or obligation to someone or something. The moral commitment usually results in action and is not a matter of passive feeling or mere recognition. When someone recognizes a duty, that person theoretically commits himself to its fulfillment without considering their own self-interest. This is not to suggest that living a life of duty entirely precludes a life of leisure; however, its fulfillment generally involves some sacrifice of immediate self-interest. Typically, "the demands of justice, honor, and reputation are deeply bound up" with duty.

Cicero discusses the concept of duty in his work “On Duty". There, he suggests that duties can come from four different sources:

Other uses of the word have sprung from the root idea of obligation, a concept involved in the notion of duty. For example, the concept is used to describe the services performed by a minister of a church, by a soldier, or by any employee or servant.

Many schools of thought have debated the idea of duty. Many assert mankind's duty on their own terms, but some philosophers have absolutely rejected a sense of duty.

Duty has to be accepted and understood on the basis of one's foundation of sense and knowledge. Therefore, duty and its manifestations vary with values from culture to culture. On one hand duty may be seen as terms of reference, job description, or behavior - and it is all of that ... but duty is not only about doing things right, it is about doing the right thing.

All content from Kiddle encyclopedia articles (including the article images and facts) can be freely used under Attribution-ShareAlike license, unless stated otherwise. Cite this article:
Duty Facts for Kids. Kiddle Encyclopedia.