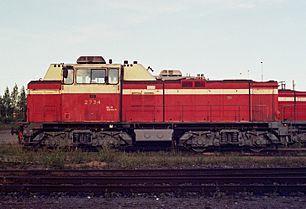 Dv12 is the name of a type of locomotive used in Finland. They are operated by VR, the biggest railway company in Finland. In total, 192 locomotives were built between 1963 and 1984. They weigh 68 metric tonnes and their maximum speed limit is 125 kilometers per hour. Today, they are used in freight trains and sometimes in passenger trains.

All content from Kiddle encyclopedia articles (including the article images and facts) can be freely used under Attribution-ShareAlike license, unless stated otherwise. Cite this article:
Dv12 Facts for Kids. Kiddle Encyclopedia.